Augusta was first settled in 1856, although it was known as Bridge Creek until the village was platted in 1857. Augusta’s name was changed around this time by Charles Buckman, a native of Maine and one of the first settlers, as a tribute to his home state.

Other early settlers, John F. Stone and L.F. Clarke, built the area’s first industry; a sawmill, along the banks of Bridge Creek in the winter of 1856.  John F. Stone also built the dam across Bridge Creek, assisted by John Hackett, at the site of the remains of the present dam.

In 1857, a schoolhouse was built, where Miss Parland was engaged as a teacher, and Rev. John Holt held religious services. In 1885, the City of Augusta was created with four wards, the division being Stone and Lincoln Streets, which remain to this day. Until 1900, farmers in Augusta produced primarily grains, but at the turn of the century, dairy and stock farming became more prevalent.

In 1911, the Augusta Public Library was finally created as a result of the urging of Miss Maud LeRoy to the Tuesday Club, which also felt that Augusta should have a library.

The library was rebuilt as the Memorial Library, a tribute to the veterans of World War 1, in 1932.  The original lending of items was on a rotation with a Wisconsin Traveling Library, as well as city-owned books, many of them in German. Frankie Elizabeth Scott Wilson was the first official librarian, assisted by Anna Knuth and other Tuesday Club members.

The longest serving director/head librarian was Anna Bartig, who served for 30 years before failing health forced her into retirement. She is still remembered fondly as a “shushing librarian”.

The Augusta Memorial Public Library was remodeled in 1982, and again in 1996, reopening in June of that year.

Current staff include Leslie LaRose, Library Director since 2006; Adult Services Librarian, Stacey Brown, started in 2018; Youth Services Librarian, Lindsey Clark, hired in 2021; Kati Warner, has worked in the library since 2018; and Judy Hawkins has been a Senior Aide since 2017. 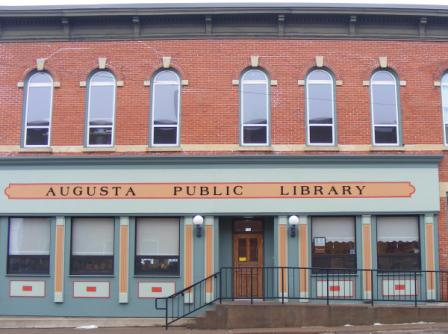